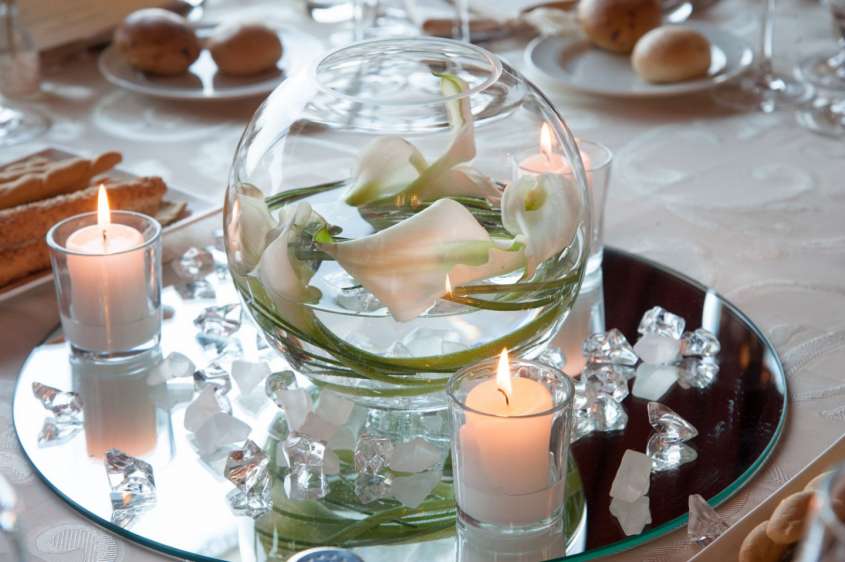 At the table prepared according to the rules of etiquette, the centerpiece certainly cannot be missing, indeed it is a must. But what to put? Even this “accessory” has some very specific rules that will have to be followed in order not to run into problems that could ruin your dinner or lunch.
On the market you can find the most disparate centerpieces in shape and material, some even ready and do it yourself, but remember that the first rule to follow is that they are coordinated with the rest of the elements present and the second rule is that they will not have to prevent the conversation between the diners. For this reason centerpieces that are too big and above all tall will be banned, so much so as to prevent even seeing each other between two people sitting frontally. In the case of long rectangular tables then, it will be good to use more centerpieces that, although not equal, have an element in common and in an equidistant position between them.
Certainly the most suitable and used element is the flowers but even here we will have to be careful in choosing them. In addition to size we will also have to think about the smell that should not be too strong to avoid bothering guests during the meal. It would then be correct to ask our guests for the existence of some particular allergies so as not to incur in unpleasant incidents that cause very little reactions.
An alternative idea and more and more used lately, is the use of candles also as a centerpiece, especially for an evening event whose effect would heat the environment. The same rules of flowers apply to candles too. We avoid candles that are too large or too tall for the same reasons and we avoid scented candles that give off too annoying smells while eating. Yes, however, with colored candles but with neutral odors.

previousGALATEO: HOW TO SET THE TABLE
nextGALATEO: ASSIGN THE PLACES

PRACTICAL ADVICE: HOW TO PRESENT A HOUSE FOR SALE

PRACTICAL ADVICE: HOW TO PRESENT A HOUSE FOR SALE Deciding to sell your home, either privately or through the help of a real estate agency, will involve the entry of people who will have to...
Leggi di più
27 June 2019

GALATEO: BEING VEGANS AND FOLLOWING THE GALATEO

Being more and more followed as a food lifestyle choice, being a vegan is now more common than you might think. But if we are vegans and we have dinner guests we know how to...
Leggi di più
20 June 2019

After dessert, we move on to a new phase of our invitation, after dinner: what happens on this occasion? What is good for our guests? According to the etiquette, all this part of the evening...
Leggi di più
6 June 2019

Certainly the first invitation to dinner or lunch to inaugurate our new home was made to friends and family with whom we talked freely about everything, but if we also wanted to organize a more...
Leggi di più